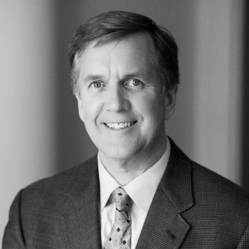 As Chairman and CEO of Hovde Group, Mr. Hovde is responsible for overseeing the firm’s strategic growth initiatives, as well as playing a very active role in many of the firm’s key client relationships. In addition, Mr. Hovde plays an integral role in assisting the firm’s clients with their most important business transactions, be it issuing capital or pursuing M&A.

In addition to being an investment banker, Mr. Hovde with his brother Eric, own a controlling interest Sunwest Bank, headquartered in Irvine, CA, which has approximately $2.1 billion in assets and $220 million in equity. As bankers, they see all the issues that management and board members of banks wrestle with daily.

Mr. Hovde is also on the board of directors of a $2.6 billion asset community bank in the Chicago area and an $2.0 billion asset size publicly traded bank in the Seattle area. He also serves as a trustee of several charitable foundations. Before co-founding Hovde in 1987, Mr. Hovde was Regional General Counsel and Vice President of a national commercial real estate development firm, Vantage Companies. Previous to that, Mr. Hovde served as an attorney specializing in real estate law with a 200-member law firm based in Chicago, Rudnick & Wolfe, which is today DLA Piper. Prior to that, Mr. Hovde practiced accounting in Chicago as a Certified Public Accountant with one of the former “Big Eight” public accounting firms, Touche Ross LLP, which is now Deloitte & Touche LLP.